Trigger Warning – This story contains information about sexual assault, violence, and/or suicide which may be triggering to survivors.

Fernanda* didn’t sleep nights in the room she shared with her sister. Rather she stayed awake to protect her.

They were not yet even teenagers, victims in the home and at the hand of their employer whose home they cleaned and meals they cooked.

“He used to sneak into our room and would touch my sister,” she says. “So from that moment, I stayed awake taking care of her — until one day he touched me. I never told my mother, because I didn’t think anyone would believe me.” Emotion welled in her throat as she shared her story from a modest concrete office space in Guayaquil, Ecuador. A single bare lightbulb dangled above as she recounted her experience, casting shadows across the kitchen.

One of 10 children, Fernanda spent her early childhood in Esmeraldas, a coastal city in northeast Ecuador. Her mother alone was unable to support all of the children, so at age 12, Fernanda went to work, along with her sister, in a couple’s home, cooking and cleaning in exchange for food and clothes. There was no salary.

The man in the house, her employer, soon began sexually harassing and abusing Fernanda and her sister, as if that behavior was expected, a part of their job description. “I didn’t realize I was just a child,” she says. “I didn’t know that you have to respect a child, and he made me feel like I was responsible for all the things that were happening.”

Fernanda feared that by mentioning the assaults, she would create trouble between her mother and the employer — even place her mother in physical harm.

The abuse continued, not only in that home with that employer but in other homes with other employers. “Scratch me here,” one often told her. “Look what I have here,” he would say, suggestively. At 14, Fernanda moved to Santo Domingo, but in every new job, behind every new door, the next employer harassed and abused her just as the previous one had.

“I didn’t realize I was just a child.”

One employer told Fernanda on her first day of work that sex with him was expected. Another masturbated in front of her. In one home, with no bedroom of her own, she slept on the floor by the bathroom. “I never knew whether to pretend to be asleep or to show him I was awake,” she says. “What was the best way to avoid the abuse?” she recalls thinking at the time. As she quit one job to find safety in the next, people felt she was unreliable. “Everyone thought I was irresponsible and lazy,” she says.

At 15, she moved by herself to Guayaquil, Ecuador’s economic hub, where she attended school on the weekends and worked during the week. Fernanda finally found a job with a woman employer who treated her well. “She was like a mother to me,” she says.

When the woman started dating a new boyfriend, however, things changed. Fernanda says he physically abused the woman and the children. He walked around the house naked, verbally mistreating Fernanda and others in the home.

The cumulative effect of so much abuse could have been deadly: Fernanda wanted to kill herself by overdosing on pills. 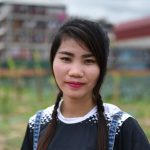